4 reasons Israel is the best travel destination for vegans

“It’s been quite a revelation for me that you can be in a country for six days and get vegetarian and vegan food all the time. I have traveled to many countries and this has never happened,” said Divya A, assistant editor of the Indian Express in Delhi, as she dug into an eggplant-and-tahini wrap at a Jerusalem vegetarian restaurant.

Divya was one of a trio of Indian journalists hosted by the Israeli Tourism Ministry to show off Israel’s vegan and vegetarian offerings – everything from classic falafel (fried chickpea balls) to innovative dishes like veggie shawarma and halva parfait.

Trend-spotters say plant-based cuisine will be the hottest culinary trend of 2018. International food and restaurant consulting company Baum+Whiteman reports that Google has seen a 90% increase in vegan searches in the past year.

As Divya and her companions discovered, Israel is a terrific destination for tourists who already eat this way or wish to explore how creatively plant-based dishes are served up here.

“Vegan travelers will find a lot to like in Israel,” PETA Vice President of International Campaigns Jason Baker tells ISRAEL21c. “The country is a leader in the switch to vegan eating: plant-based restaurants are thriving and easily accessible to the 1 million Israelis – out of a population of 8 million – who don’t eat meat.”

Approximately 5 percent of Israelis identify as vegan, the highest percentage of vegans per capita in the world. About 8% Israelis are vegetarian, avoiding meat but eating animal-derived products such as cheese and eggs.

“I’m a vegetarian, and it thrills me to know that there is a vegan movement and Israelis are at the heart of it,” Divya told ISRAEL21c. 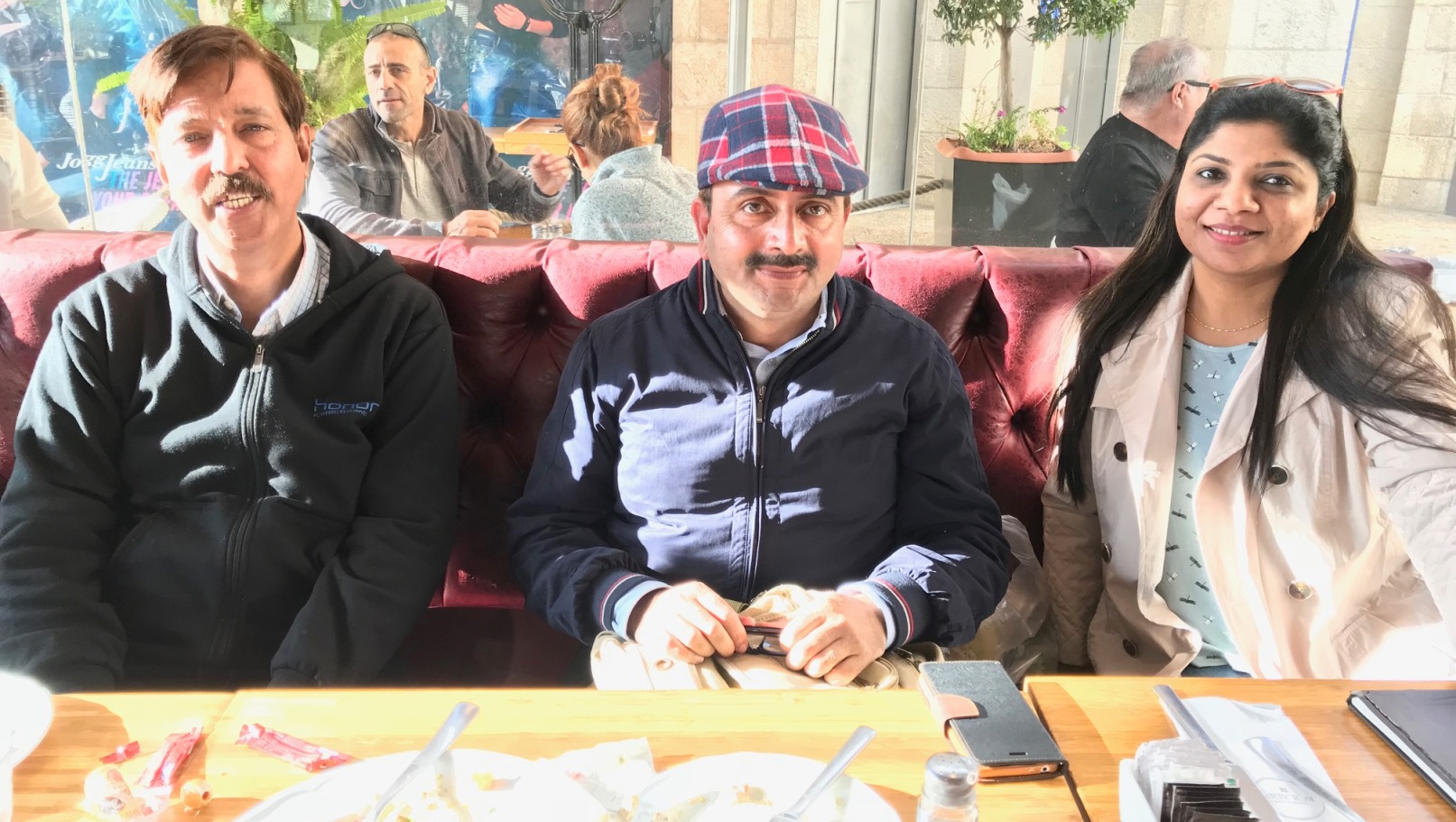 Here are four reasons Israel is tops for vegan tourism. 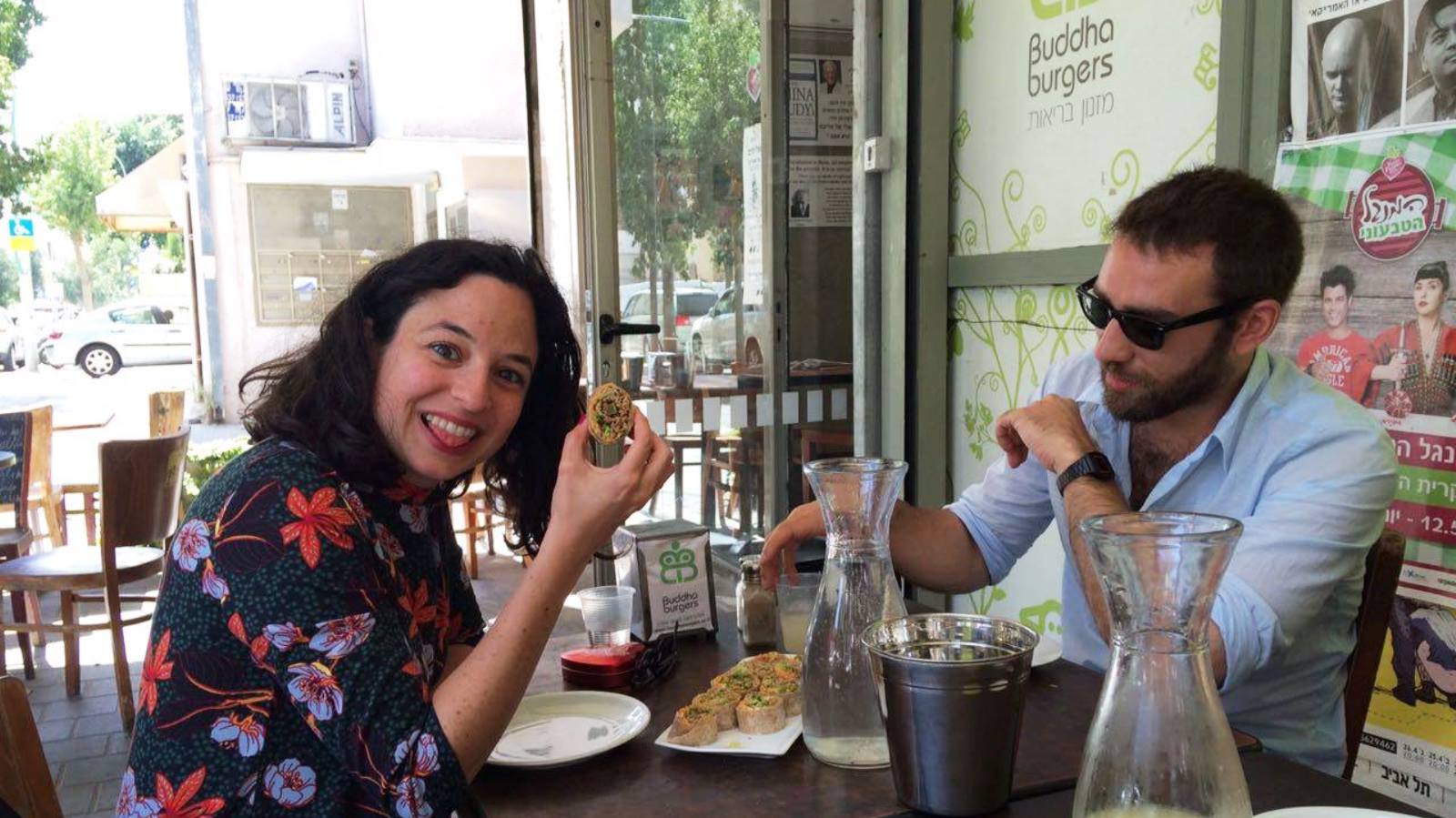 “Vegan-friendly” means at least 25% of menu items are plant-based. Lots of eateries are 100% vegan, including a new pub in the hip Florentinneighborhood.

Roy Dado of Be Tel Aviv Tours says the company’s TLVEG Tour, launched about three years ago, takes visitors to a variety of vegan restaurants and street-food kiosks for lunch or dinner tastings (kosher upon request).

“We talk about what makes Israel the world’s No. 1 vegan destination,” Dado tells ISRAEL21c. “There is no vegan agenda to the tour but we provide the latest information available about veganism and health.”

VeganFriendly, an Israeli nonprofit organization founded in 2012, offers an ever-growing list of hotels, vacation apartments and bed-and-breakfasts in Israel that cater to vegan tourists.

“Before 2017 there weren’t any hotels on the list,” says VeganFriendly founder Omri Paz, pointing to the strength of the trend.

Israeli vegan chef and consultant Ori Shavit tells ISRAEL21c that Israeli hotel chains have become “very aware of the need to give proper options to vegan customers — foreigners and Israelis alike — and to guests trying to reduce meat consumption. Most respectable hotels, if you say in advance that you require vegan food, will go out of their way to provide a nice menu of options.”

In 2014, Shavit was culinary advisor to Sheraton Tel Aviv as it started phasing in vegan dishes in all its food and beverage outlets – including the main and poolside restaurants, lounges, breakfast buffet and room service.

Some hotels advertise that the furnishings in guest rooms don’t contain animal products (no leather) and that the cosmetics in the bathrooms weren’t tested on animals.

“Compassionate visitors to Israel should have no trouble finding cruelty-free toiletries, since testing cosmetics on animals is banned there, as is the sale of any cosmetics or cosmetics ingredients that have been tested on animals,” said PETA’s Baker. 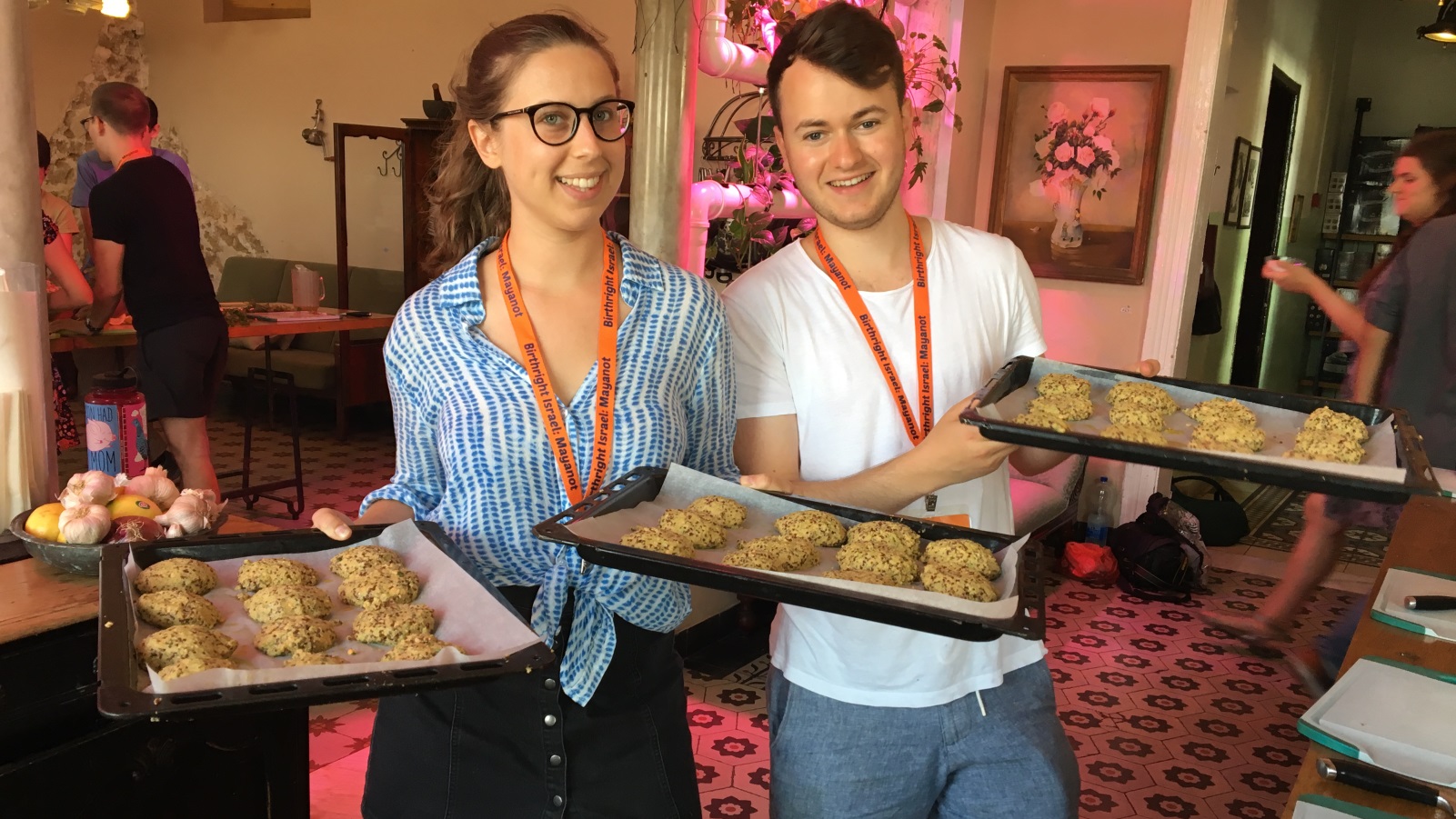 VeganFriendly’s list of vegan and vegan-friendly restaurants numbers in the high hundreds.

“About 10 more completely vegan restaurants opened in Israel in the past year,” says Paz. “As we speak there’s a fast-food vegan chain, Ludens Express, opening 20-something branches all over the country.”

All 55 Domino’s Pizza locations in Israel offer the option of vegan cheese.

Of course, it’s more fun to prepare the food yourself, and Israel has that covered too. The Indian journalists participated in a meatless Druze cooking workshop in the Galilee arranged by tour company Galileat, and another in Tel Aviv with food journalist Phyllis Glazer. 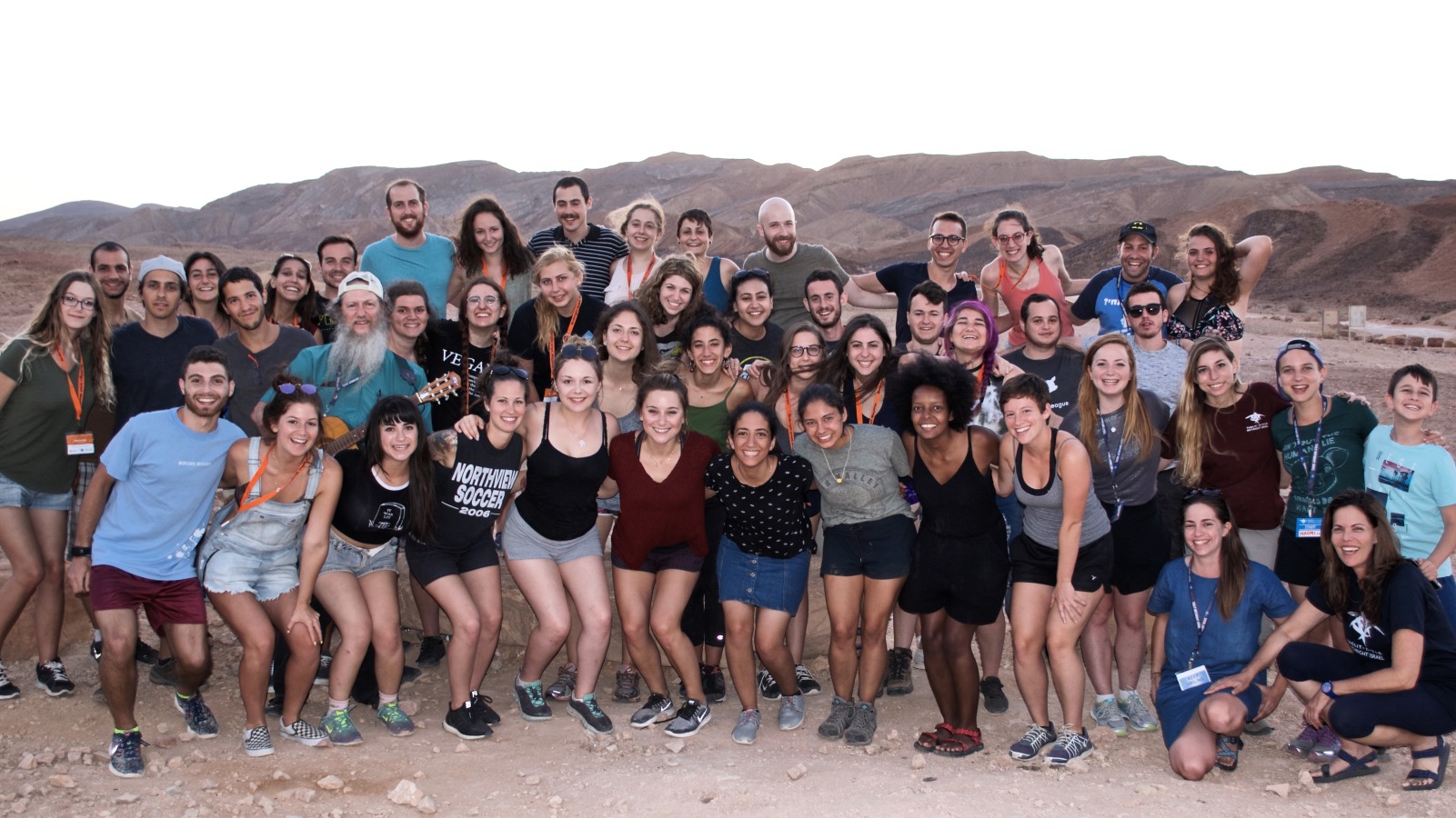 In January, the second vegan Birthright tour to Israel was organized by the US nonprofit Jewish Veg in conjunction with Mayanot Israel. Each tour had 40 participants, 10 of them young-adult vegan Israelis who accompanied their American counterparts.

The itinerary included a cooking class with Ori Shavit, meetings with Israeli vegan leaders, and visits to Freedom Farm Sanctuary, Amirim (a vegetarian village overlooking the Sea of Galilee), the all-vegan Black Hebrew community in Dimona, the vegan Panda Chocolate factory in Jerusalem, and a new vegan grocery store in Tel Aviv’s Carmel Market, among other stops.

“In addition to eating our weight in falafel and hummus, [we] ate tons of new vegan foods that I never even knew existed,” blogged Vegan Birthright participant Rachel Newbury, 25, from Connecticut. Newbury wrote that she is “still dreaming about the vegan cheese from the Dan Jerusalem hotel.”