An Alberta traveller who stopped to deal with road kill ended up performing an emergency C-section and delivering a fawn by the side of a highway in northern British Columbia.

Sean Steele was on vacation with his wife, driving from their home in Barrhead, Alta., to Prince Rupert, B.C., to visit family and go fishing.

Several hours from their destination, Steele pulled over to help after a pickup truck ahead of him struck a deer on Highway 16 near the Kitwanga Bridge, about 1,200 kilometres north of Vancouver.

Steele said the deer was horribly injured, so he grabbed a knife from his own pickup to put the doe “out of its misery.”

Then he pulled the carcass off the highway into the ditch. 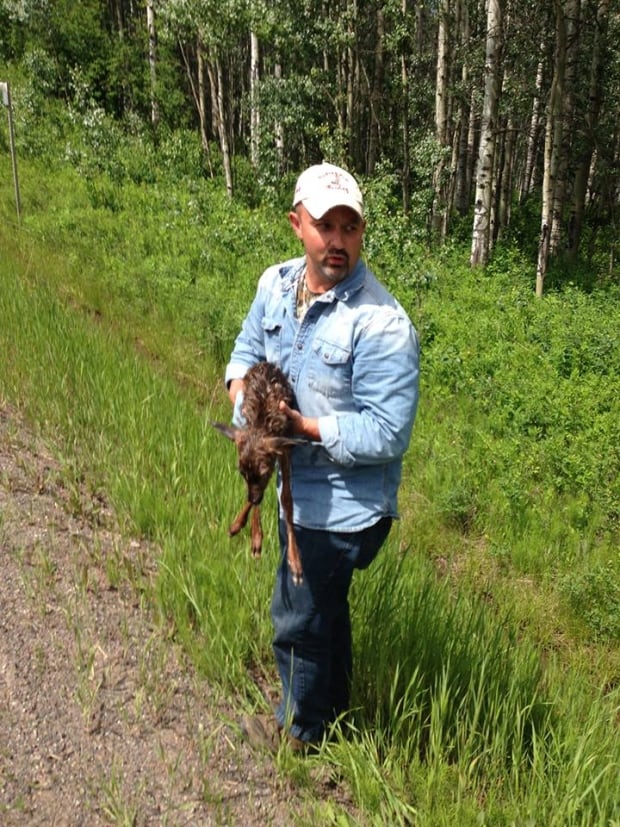 Sean Steele carries the fawn he delivered and then resuscitated to the safety of his truck. (Michelle Steele/Facebook)

“I seen the fawn in the uterus twitching,” said Steele.

“We saw the fawn’s legs hanging out. We just did a caesarean on her,” he said.

“On the side of the road, I cut the doe open and pulled her fawn out.”

Then he worked to resuscitate the newborn that had just lost its mother.

“I cleaned out its mouth, put some grass in its nose so it would sneeze and get all the crap out of it,” said Steele. “It starting breathing.”

“We just dried it off and looked after it. Put it in the back seat of my truck.”

Steele said he called conservation officials, who advised him to take the fawn to the Northern Lights Wildlife Society refuge in Smithers, 110 kilometres away.

He acknowledges it’s not something that happens every day, but he’s pretty humble about his part in the deer delivery.

“I have lots of experience with animals,” said Steele. “I hunt and fish. Used to chasing deer around the bush. Milked cows for 20 years.”

Steele’s family helped name the female fawn Friday, for the day of her unusual birth.

Alberta tourist cuddles the fawn he delivered by C-section in B.C. 0:28

The fawn is now drinking milk from a bottle “like a champion,” according to a social media post from the Northern Lights refuge, where Friday has the company of a male fawn. “We are happy to report it seems to be unharmed.”